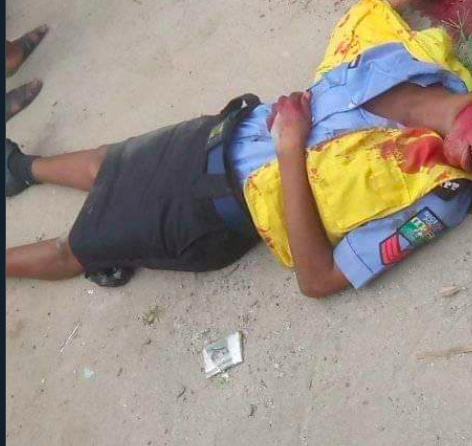 A female Police officer and mother of a four months old baby was killed by her colleague attached with Rivers State COVID-19 Taskforce enforcing the lockdown measures in Portharcourt.

It was gathered that a trigger-happy policeman attached to the taskforce pulled the trigger that killed his colleague, who was not a member of the taskforce.

The incident was said to have happened 1st. Market junction at Eneka, Obio-Akpor,Port Harcourt while the lady was in active service.

The Hilux belonging to the Taskforce Team have been towed down to Eneka police station at the moment.

The new Commissioner of Police Rivers State, Joseph Mukan, who confirmed the development, said the policeman attached to the taskforce misused his weapon.

He said: “A policeman attached to the taskforce did the shooting.

“He was shooting anyhow and in the process killed another policewoman. The policewoman was hit by a stray bullet”.

“As I am talking to you, the orderly room trial is ongoing. If we conclude it this night, we will arraign him tomorrow”, he said.

He insisted that there was no justification for the killing adding that the law must take its course.