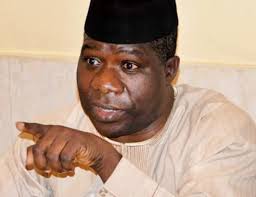 Sen. Opeyemi Bamidele, the Chairman, Senate Committee on Judiciary, Human Rights and Legal Matters, has donated N10 million towards fighting the coronavirus in Ekiti State.
The Senator disclosed this in a statement in Abuja on Wednesday.

The gesture is coming barely 24 hours after Gov. Kayode Fayemi announced an eight-man Support Account Committee to tackle the pandemic in the state.

Bamidele, who represents Ekiti Central Senatorial District on the platform of the All Progressives Congress, (APC), said “that the donation is my way of identifying with the state government and the people in combating the pandemic.”

According to the statement, Bamidele explained that “this patriotic zeal is an additional step after all the 109 senators had resolved to donate half of our monthly salaries to the National COVID-19 Account. ”

He also called on well-meaning indegines  of the state to complement ongoing efforts of Fayemi Administration to curtail spread of the global threat.

“I, Sen. Opeyemi Bamidele has started by donating a sum of N10 million to fight the scourge.
“Other federal lawmakers from Ekiti will definitely do something in a matter of days as well.

“A sum of N5 million has been paid into the State’s COVID-19 account while the remaining N5 million will go into the centrally coordinated food drive initiative specifically targeted at the vulnerable population in the senatorial district.

“I am appealing to other illustrious leaders, sons and daughters of Ekiti to join hands with the state government by contributing sacrificially to the COVID-19 account to augment what government can mobilise.
“The House of Representatives members and senators from Ekiti had since last week been distributing hand sanitizers, hand washing soaps and buckets in their various constituencies.

“This came barely 24 hours after Governor Fayemi’s statewide broadcast where he appealed to well-meaning Ekiti stakeholders to join hands in waging war against coronavirus.

“This underscores the fact that the cord of unity among public officials remains strong and such strength is being deployed to develop human capital resources of our dear state,” he said.