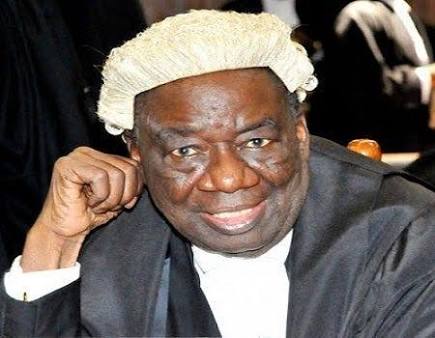 Bamidele branded the departed former Attorney General of the Federation and Minister of Justice, as a global figure in the Temple of Justice, having attained the enviable height of Queens’ Counsel in England and Senior Advocate of Nigeria during his meritorious legal practice.

Akinjide, who was the AGF under Alhaji Shehu Usman Shagari in 1979, died on Tuesday, at the age of 88.

The federal Lawmaker, in his condolence message to the deceased’s family, on Wednesday, said history had consigned Akinjide to the right side as someone who dedicated his stupendous mental knack to develop the country, right from his  tender age during the first republic of Alhaji  Tafawa Balewa. adsbygoogle || []).push({});

Reeling out accolades on the legal giant for being one of the pioneers of robust legal practice in Nigeria, Bamidele said Akinjide’s dazzling  command of English Language and ad infinitum knowledge about  law were an advantage of  colossal measures to Nigerian nation.

“Chief Richard Akinjide was an all-round person. In terms of legal mastery, he was superb. In fact, he was one of the pioneers of robust legal practice in Nigeria, having caught his teeth in England and later returned home to join a few other compatriots to make legal profession and Nigeria arenas of pride.

“The late ex-AGF was a Colossus in the courtroom, an exemplar in the political turf and a highly venerated stickler for rules, discipline, morality , good conduct, etc.

“His charismatic posture added immeasurable panache to legal practice and made it a captivating and darling profession to the present generation of practitioners, including me.”

Bamidele, who is also a member of the prestigious Body of Benchers, also said “It won’t be gainsaid to aver that Chief Akinjide donated his entire life to the nation by participating in every facet  of constitutional drafting process to give the country a rocky foundation for good governance and development of our constitutional democracy.”

“I pray that the good Lord will grant his soul  eternal rest in the bosom of the Lord”.