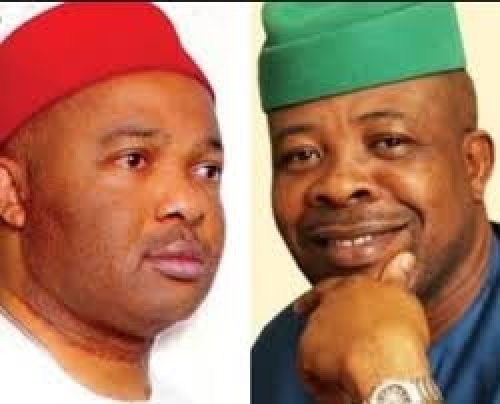 The Supreme Court has stood down its proceedings for the next three hours in a judicial review between Imo State governor and Hon. Emeka Ihedioha.

A seven-man panel of justices of the apex court led by the Chief Justice of Nigeria, CJN, Justice Tanko Muhammad, stood down after they heard all the parties on whether on not its January 14 judgement that sacked Ihedioha and enthroned Hope Uzodinma of the All Progressive Congress, APC, should be set-aside.

On its part, the Independent National Electoral Commission, INEC, which is the 3rd Respondent, through its lawyer, Mr. Taminu Inuwa, SAN, said it would abide by the decision of the apex court.

Earlier, Agabi withdrew the initial review application his clients filed on February 5, and substituted it with another one dated February 17.

The previous application was accordingly struck out.

Arguing his case, Agabi, SAN, said his clients were only praying the apex court to correct a mistake that occasioned a great miscarriage of justice against them.

“We are not here to challenge the authority of this court. We respect the supremacy of this court and we recognise that your judgement is final.

“If we can go to God in prayer to change his mind, so also we have come before this court to change its mind”.

He contended that judgment of the Court of Appeal that struck out Uzodinma’s petition for being incompetent, was not decided by the Supreme Court.

Agabi noted that whereas only results from 366 polling units was in issue, the apex court panel, erroneously made reference to 388 poling units.

He queried the whereabout of the balance of results from 22 polling units in the state, saying “no indication was given as to what the results were in respect of the 22 polling units.

Besides, Agabi argued that Uzodinma had in his substantive petition before the Imo State Governorship Election Petition Tribunal, maintained that the gubernatorial contest that held in the state on March 9, 2019, was invalid by reason of corrupt practices and non compliance with the Electoral Act.

Ihedioha’s lawyer therefore contended that it was wrong for the apex court to declare Uzodinma winner of an election he adjudged to be flawed.

“He got a benefit for what he did not seek”, Agabi added, even as he urged the apex court to set-aside its judgement that favoured Uzodinma and the All Progressive Congress, APC, and restore the Court of Appeal verdict that affirmed Ihedioha as the valid winner of the Imo state governorship election.

He insisted that the Supreme Court was adequately empowered by section 6(6) of the 1999 Constitution, as amended, to reverse itself on the matter.

“My lords, when I was a child my father will beat me to cry and also beat me to stop. My Lords please we are crying, do not treat us like my father did. I urge you set aside that judgement.

“My lords are human and can make mistake, but the law has given you power to correct yourselves so that your mistakes are not immortalized”, Agabi pleaded.