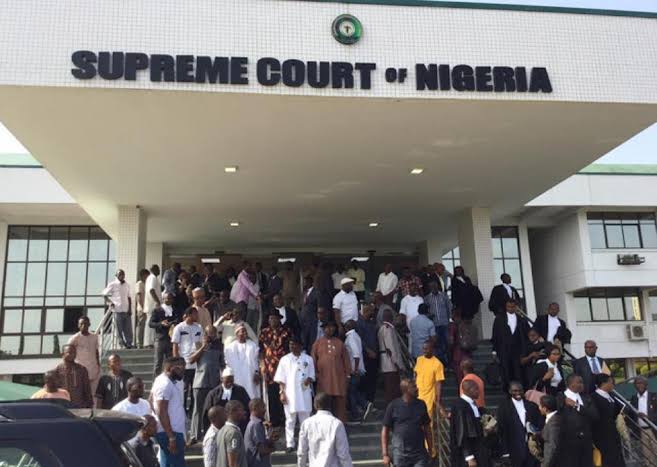 A five man panel of Justices on Tuesday reserved its ruling on the All Progressives Congress application for the review of its judgment which nullified the party’s victories in the 2019 general elections.

APC is pushing for a judicial review that would remove governor Mohammed Bello Matawalle of the Peoples Democratic Party (PDP) out of office.
The development has heightened tension among both party members, wondering the likely outcomes.

The panel of the apex court led by the Chief Justice of Nigeria, Justice Tanko Muhammad said the two contending parties would be communicated.
The APC and the faction of the party in Zamfara State led by former Governor Abdulaziz Yari had filed the application for the review of the May 24, 2019 judgment, which had nullified their victories at the general elections barely four days to their inauguration.

In the said May 24, 2019 judgment, the Supreme Court had declared that APC failed to conduct valid primaries and, therefore, had no candidates in the 2019 general elections.

The apex court had declared the votes polled by the APC in the elections as wasted.

The Peoples Democratic Party and its candidates, who polled the next highest votes in the elections, were declared the winners of the elections and eventually inaugurated.

The APC’s application for the review of the May 24, 2019 judgment was opposed by Senator Kabiru Marafa-led faction of the party in the state.

APC’s lawyer, Chief Robert Clarke (SAN), on Tuesday urged the court to grant his clients’ application by setting aside the consequential order which directed that the candidates with the next highest votes be sworn in.

He urged the apex court to order the APC to conduct fresh primaries.

He argued that the previous orders of the apex court were made without jurisdiction.

But the Marafa faction’s lawyer, Chief Mike Ozekhome (SAN), urged the apex court to dismiss the application and award huge and punitive costs against the applicants’ lawyer.

Defection of BOG poses no threat to ADP in 2023 – Adelaja