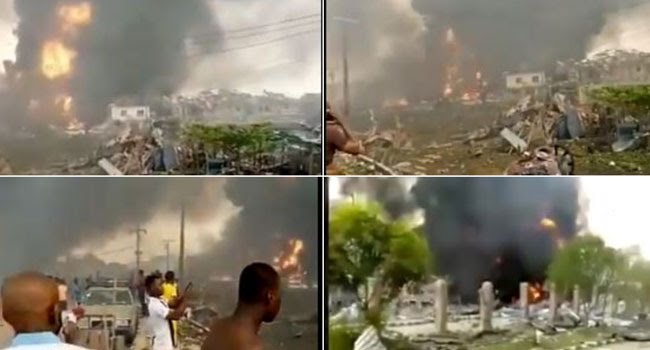 Abule-Ado Area around Festac town in Amuwo Odofin Local Area of Lagos State on Sunday afternoon went aflame as a result of pipeline explosion.
The fire has reportedly affected the neighboring areas, sparking a massive billows of smoke with nearby buildings including Bethlehem School destroyed.

The area has been reportedly cordoned off by security agents.

An eyewitness said that a tipper offloading sand caught fire, which spread to a nearby pipeline, triggering the blast.

The Director-General of LASEMA Dr Femi Osanyintolu confirmed that the pipeline had earlier been vandalized by unknown persons.

Many nearby houses have been destroyed by the blaze while the explosion damaged buildings around the area and its environs.

The Lagos State Fire Service says there are buildings on fire in Ado Soba, Abule-Ado, and Amuwo-Odo.