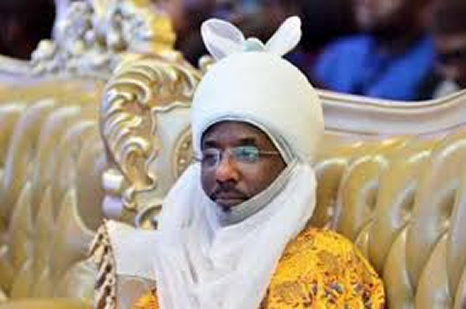 The Kano State Anti-corruption Commission has invited the Kano State Emir, Sanusi Lamido Sanusi to appear it on Monday.

The agency asked the monarch to appear within 24 hours over his alledged involvement in land racketeering in Kano State.

Addressing journalists at his office on Thursday, Muhuyi Rimingado, chairman of the commission, said Sanusi is expected to come on Monday over the allegation of sales of government property illegally.

A federal high court in Kano had dismissed the preliminary report of the state anti-graft agency which recommended the suspension of Sanusi, pending investigations into alleged financial misappropriation of the emirate’s funds.

Rimingado, however, explained that new probe had nothing to do with the previous one, adding that the agency is empowered to open fresh investigation into any body found wanting.

According to him, Sanusi allegedly ordered the illegal sale of several hectares of land and that “proceeds of the sales remitted to the emirate council bank account can be traced to the companies of interest to His Highness”.

“I wish to categorically state that, this commission is entering a new investigation brought forward by a whistleblower on 29th December, 2019, and is not related to an earlier investigation which is still subject matter of civil suit,” Rimingado said.

“As we await the arrival of the invitee, we received a letter from Messrs Dikko and Mahmoud stating among other things that the power of this commission to initiate criminal complaints is being challenged in suit No.K/208/2019.

“In response to that, the commission drew the attention of the learned colleagues on the binding decision of the court of appeal which affirmed the Kano State High Courts decision that settled the power of this Commission to investigate allegations of corruption against any person in the state as decided in the case of Kano state public complaints and anti-corruption Commission & 1 IRS V. Baba Salisu and 26 ors), 2019 LPELR 47107 CA.

“Preliminary findings suggest that, a company; Country Wide House Ltd. served as a corporate vehicle to allegedly launder the sun of over N2bn being proceed of several hectares of land in Darmanawa phase I and II and Bubbugaji, under the former right of occupancy CON-RESS 2016-503 illegally sold to Messer family home fund limited at the alleged instance of His Highness the emir of Kano.

“Investigation further reveals that, some of the proceeds of the sales remitted to the emirate council bank account can be traced to the companies of interest to His Highness.

“But we remind them on the legal duty imposed by law on their client to honour our invitation and provide all necessary information as required and urged them to inform their client to come forward on Monday 9th March, 2020.”
There has been a face-off between Sanusi and Abdullahi Ganduje, the state governor.