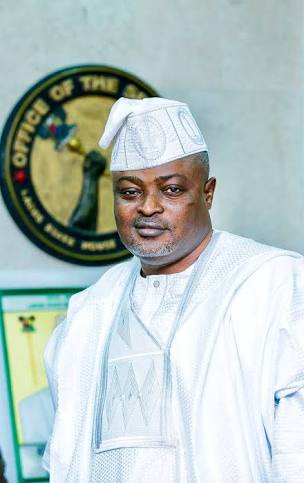 The Speaker of the Lagos State House of Assembly, Mudashiru Obasa has been involved in illegal activities of awarding  contracts to himself through twelve different companies.
According to SaharaReporters  which published a report on Saturday, highlighting a list of companies the Speaker had been using to award contracts to himself and launder public funds, it was revealed that he uses members of his family’s name and children.

The report revealed that Obasa primarily used De Kingrun Multipurpose Nigeria Ltd for securing and implementing contracts from the parliament and ministries.

He also owns several other companies used for receiving contracts from the Lagos Assembly.

According to the documents sighted by SaharaReporters, Obasa is a direct beneficiary at De Kingrun Multipurpose Nigeria Ltd.

To avoid it being directly linked to him, the Speaker did not use his name to register but used his father, wife and children as shareholders in the company.

The Public Procurement Act 2007 and Corrupt Practices and Other Related Offences Act 2000 bars political office holders from issuing contracts to themselves or companies they directly benefit from but these laws are being constantly violated with impunity in the country.

In the Company and Allied Matters Decree 1990 of De Kingrun Multipurpose Nigeria Ltd. with RC: A813/08/308 sighted by SaharaReporters, the names listed on the company are Obasa’s father, one of his wives and three of his children.

As at the time of registration and listing of names, Obasa’s children were underage yet they were registered as businessmen by the Speaker.

Obasa is the sole signatory to all the bank accounts of the company.

A Zenith Bank account of the company domiciled at Oke Ilewo, Abeokuta, Ogun State, has in it hundreds of millions of naira illegally acquired by the Speaker of Lagos House of Assembly.