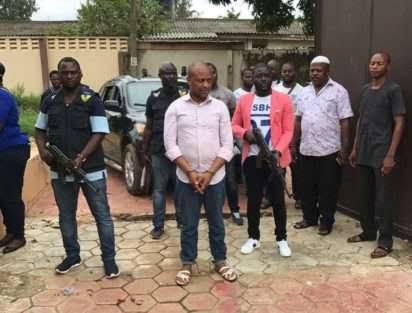 Police cop of over 20 years in service who has earned himself fame and respect, but a nightmare to daredevil kidnappers and armed robbers said his team rejected $2 million bribe from Chukwudumeme Onwuamadike, alias Evans.

“Even though my kind of job involves taking very dangerous risks, what keep me going is when I get the culprits arrested after a hard chase, which sometimes take months and even years.

On bribes he said, yes, when we arrested Evans, he offered us $2million if we can keep quiet and let him go and he offered to provide the cash in 48 hours.

“But we rejected his offer, we had to move away with him and then I blew the thing up.
“And I think that should be the highest amount that I have ever been tempted with.
“There was also the case where some people stole money from a Bureau De Change outlet totaling $2million that was brought to us and we were able to recover $1. 8million from the thieves among them a bank staff.

“So, after the recovery, those guys offered to pay us 50 per cent of the money that we recovered which is about $900,000. We also rejected that offer and informed the owner of the money about the arrest and recovering $1.8million. So, that was another big offer that was made to us”, he said.