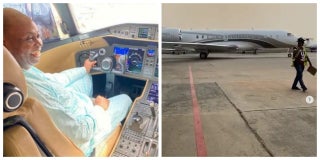 In the report by a foremost publisher, Dele Momodu, the businessman purchased a Bombadier Global Express 6000, just 2 years after buying a jet said to be worth $35 million.

The singer had 2 days ago announced on social media on the arrival of the jet. Many of his fans had boasted that the jet belongs to him and were already sending in congratulatory messages to him on the new whip.

Well, it turns out the jet is his father’s anyways.

Davido had in 2018 claimed the private jet his father bought was his. He had earlier made announcements on social media before the arrival of the jet, just like he did for this new Bombadier Global Express 6000.

Why Uzodinma would have been sacked – Justice Nweze