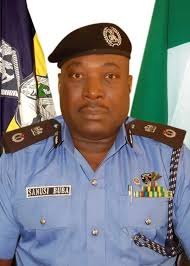 Protesters on Saturday stormed a Police station and official residence of the Divisional Place Officer (DPO) and burnt down the station in Kusada, headquarters of Kusada Local Government.

Protesters were irked by the arrest of a religious group leader who led Jumaat prayers the previous Friday with the congregation exceeding government’s directive.
Katsina State government has issued a restrictive order against large congregation as a preventive measures against the coronavirus that has hit the nation.

Apart from the human casualty, about seven vehicles and10 motorbikes were burnt.
At the order of the Katsina State Commissioner of Police, Sanusi Buba Olaide Oyelude, ninety suspects have so far been arrested

Eyewitnesses account said trouble started when one Mallam Hassan conducted Jumat prayer in one of the mosques in the town.

Hassan was consequently arrested and taken to the police Area Commander’s office in Malumfashi for questioning. The development did not reportedly go down well with some of his followers.

The followers were alleged to have on Saturday attacked policemen on duty at Kusada Police Division and torched the police station and the DPO’s Quarters.

The spokesman for the police in Katsina, SP Gambo Isah, who confirmed the development, said normalcy had returned to the town while investigation had begun on the incident.

He said Katsina governor had issued a restrictive order, but was on Friday disobeyed by some elements, staying:

“However, on Friday, March 27, 2020, some disgruntled youths under the leadership of one Mallam Hassan tested the will of the state and conducted a Friday prayer in one of the Kusada jummat mosques.

“Subsequently, he was arrested for questioning at Area Commander’s office, Malumfashi which did not go down well with some of his followers.

“Consequently, today (Saturday) around 9am, this particular group organised themselves in a tumultuous manner, attacked and overpowered the policemen on duty at Kusada Division, set ablaze the police station and the DPO’s Quarters. They also burnt down seven vehicles and 10 motorcycles in custody of the police station.”

“Ninety suspected rioters have been arrested while one of the rioters lost his life as a result of the encounter. Investigation is ongoing,” he added.