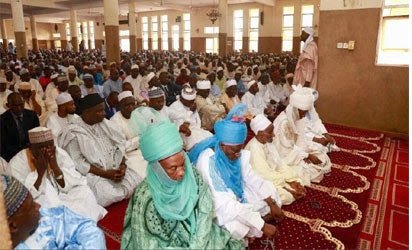 The Imam who is the Sarkin Hausawa led over crowded muslim faithful in prayers against a well publicised ban on religious and social gathering, claimed “he was not aware of government’s ban.

For over an hour, Muslim faithful crowded in and out side of the large mosque without precautionary measures against the coronavirus.

Speaking after prayers, he explained: “the Information Commissioner and her counterpart from the Health Ministry visited us to sensitize us on the virus and told us why we should not shake hands and also observe social distance but we were not told to wash or sanitize our hands before entering the mosque.

Can your faith or fear deliver you?