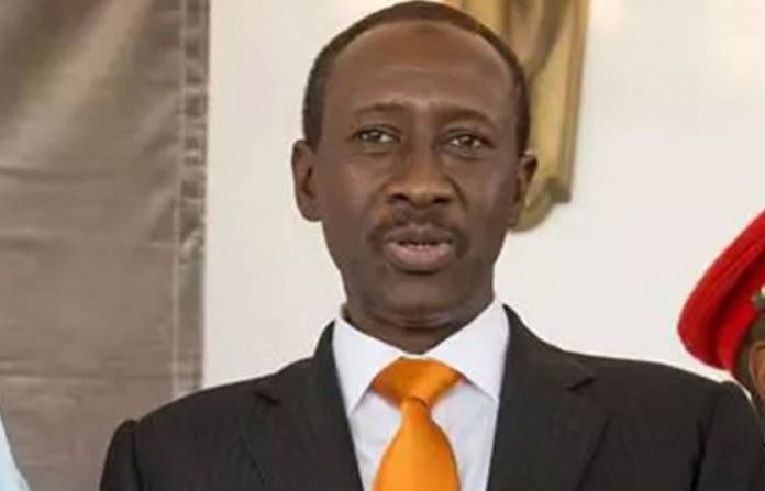 The National Security Adviser, Major General Babagana Monguno (rtd) was not present at a meeting held on Monday with President Muhammadu Buhari and Service Chiefs in the villa, CAPITAL POST, reports.

Monguno was said to have travelled out of the country to represent President Buhari at Munich Security Summit.

The NSA has been having a running battle with Buhari’s Chief of Staff, Abba Kyari over a leaked “memo, which alledged that undue interference of the CoS to the President, Abba Kyari, on matters of national security had slowed down meaningful gains that Buhari had sought to achieve. adsbygoogle || []).push({}); ”

In the leaked memo to the service chiefs, which was published by an online platform, Premium Times, Monguno directed Service Chiefs to desist from taking further directives from Kyari.

According to Monguno, in the memo, Kyari’s directives to service chiefs were sometimes issued without the knowledge or approval of the president, a practice he said had added to the government’s failure to contain insecurity.

“Chief of Staff to the president is not a presiding head of security, neither is he sworn to an oath of defending the country.

“As such, unprofessional practices such as presiding over meetings with service chiefs and heads of security organisations as well as ambassadors and high commissioners to the exclusion of the NSA and/or supervising ministers are a violation of the Constitution and directly undermine the authority of Mr President.

“Such acts and continued meddlesomeness by chief of staff have not only ruptured our security and defence efforts, but have slowed down any meaningful gain that Mr. President has sought to achieve,” Monguno said in the memo dated December 9, 2019.

After the consultation, the service chiefs passed through the office of the Chief of Staff to the President on their way out, while the Chief of Army Staff was the last person sighted leaving about 3.55 pm.

Meanwhile, the upper and lower legislative Chambers have called for the sack of Service Chiefs.

Nigerians too, have engaged in the call against the continued stay of office by Service Chiefs, saying that they have lost capacity to curtail crisis in the country.