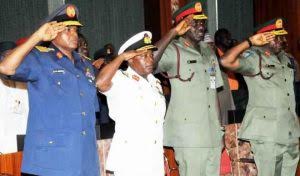 The group said, some opposition political parties were sponsoring protests to back up their calls in the face of reported upsurge of violence in the northeast, warning that such calls were inimical to the peace and unity of the country.

The group also accused opposition political parties in the country, particularly the Peoples Democratic Party (PDP), of playing politics with the unity, peace and security of the nation, and urged Nigerians to be weary of such unpatriotic entities and their antics.

Conveners of the group at a rally in Abuja on Thursday, insisted that the fight against insurgents has been politicized.

Hon Mike Msuaan and Comr Adamu Kabir Matazu, who spoke on behalf of the group comprising over 100 groups argued that those calling for the change of guards created woeful situation in the past.

“We as patriots cannot continue to look the other way and allow political parties continue to play politics with lives and unity of our dear nation. We are all witnesses to what the security situation was and what it is now. While we are not completely satisfied with the situation at the moment, we are also not unmindful of the gains made through the contributions of the current service chiefs in destroying Boko Haram and other sinister networks that pose threat to the security of Nigeria.

“We have observed for too long how the PDP and her co-travellers have tried to make political capital of the security challenge that are being fought headlong. Nigeria was on the verge of total destruct under the PDP following activities of insurgents. The PDP had no strategy to curtail the menace and rather tried frankly to deny the existence of insurgents but has now suddenly got solutions to insurgency.

“While it is their right to air their opinion on the war against insurgency, we urge her to be patriotic, as there will be no country for anyone to play politics if this insurgency is allowed to thrive unchallenged.”

The group further explained that it has taken the responsibility to speak out realising that many innocent Nigerians were falling to the antics of those calling for the sack of service chiefs for the pecuniary reasons.

“We advice all security chiefs not to be distracted by the of mischief makers but rather focus all attention on the good work they are doing to make Nigeria better and safer for all”, the group noted.