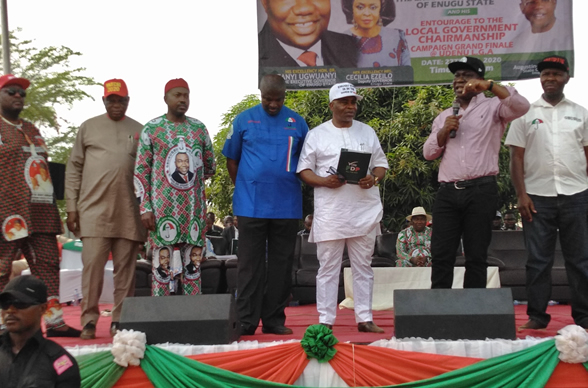 Former Deputy President of the Senate, Senator Ike Ekweremadu, has counseled the Chairmanship candidates of the Peoples Democratic Party (PDP) in the forthcoming Local Government Council polls in Enugu State to see their prospects to serve at the grassroots as an opportunity to make or mar their political careers, noting that he equally started off as a Council Chairman.

Ekweremadu enjoined the candidates to address the basic needs of the people, when elected, in order to continue to earn their trust for higher political service.

The lawmaker spoke on Thursday during the PDP mega rally at Orba, Udenu Local Government headquarters to round off the party’s campaigns ahead of the February 29th Council polls.

“Enugu is a PDP State and by the grace of God, the 17 of you will be massively voted in and returned as duly elected Council Chairmen on Saturday. So, on behalf of the Enugu State Caucus of the National Assembly, I Congratulate you in advance.

“However, let me also put you on notice that it is an opportunity that could make or mar your political careers, depending on what you make of it, because I was once a Council Chairman.

“Nobody expects you to build flyovers or to shoulder the responsibilities of the State Government and Federal Government. Just keep it simple and be sincere and accessible to the people.

“Address their basic needs- primary education, security at your level, basic rural infrastructure and in fact primary needs of the communities.

“Luckily for you, we have a rural-centric governor in Enugu State, who is leaving no stone unturned to touch the lives of the rural communities. It is up to you to effectively augment his efforts and the people will be happy with you”, he said.

The Senator, who was flanked by the host Senator, Chukwuka Utazi; Deputy Minority Leader, House of Representatives, Hon. Toby Okechukwu; Chairman, House Committee on Aviation, Hon. Nnoli Nnaji, among others; Hon. Denis Amadi, among other serving Members of the National Assembly, also enjoined the people of Enugu to the PDP en-masse in the Council polls, noting that the PDP Government in Enugu State had justified the confidence reposed in it by the people.

Why the culture of begging cannot stop in North – Shehu Sani