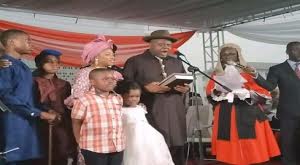 He took the oath of office alongside his deputy, Senator Lawrence Ewrhudjakpo at a low key ceremony inside the government house in Yenagoa.

Chief Judge of the state, Justice Kate Abiri administered the oath of office.

Some of the Peoples Democratic Party governors were present to witness the brief ceremony.

The governors are Seyi Makinde of Oyo State and Senator Bala Mohammed of Bauchi State respectively.

Commissioner of Police, Mr. Uche Anozie earlier ordered a dusk to dawn curfew to avert anarchy as a result of protests that rocked the state capital in the wave of Supreme Court judgement.

Read Also:  2023: Lawan meets Niger delegates, says he has what it takes to succeed President Buhari

Meanwhile, Diri in his brief speech, described his ascension as the handiwork of God.

He called on Bayelsans to join hands with his administration to move the state forward.